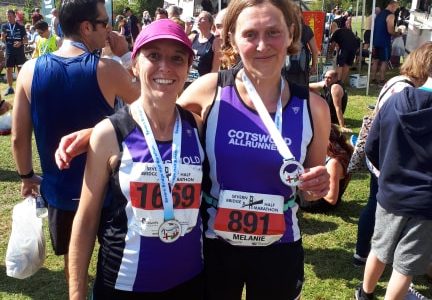 Sunday 25th August and probably the hottest bank holiday weekend in many years (last year it was absolutely pouring with rain) and there I was running the Severn Bridge Half Marathon with fellow club runner Claire McKinley-Price.

7am, bowl of porridge, slap some sun block on, gather the support crew (husband, daughter and dog) into the car and off we go.

Arrived at the designated parking (excellent and amusing instructions from Full on Sport) and bundled everyone out of the car for a short walk to a bustling and buzzing race headquarters.

Joined what seemed like a 10 mile long queue for toilets fully aware that the race start is a mile away with only 20 minutes to go. Fortunately an announcement from the loudspeaker advised 10k runners to make way for half marathon runners so a quick wee and a gentle jog to the Severn Bridge with 5 minutes to spare.

The atmosphere was incredible and I can’t think of a better start to a race than on the Severn Bridge. The tide was out, the views amazing and expansive and there was a gentle cloud cover keeping conditions slightly cooler for the start.

And we were off. It felt as if the crowd got going very quickly.  Amazing support from spectators at the start including a piper with his bagpipes.  Everyone’s spirts were good.

Within 10 minutes of starting the cloud cover had cleared and the blazing sun was burning down on us runners.  I think many of us had accepted that this would be the case and had resigned ourselves to run a sensible and safe pace.

Once over the bridge and onto the country roads and I settled into a comfortable and gentle jog.  Although I had hydrated all week and nutritionally felt strong I soon realised that the sun was going to be my enemy and I let my body dictate it’s rhythm.

There were, I think, only three official water stations with plastic bottled water.  I made good use of this water and drank each bottle fully. Quite a few of the houses on route had lovely people handing out water and jelly babies and some even had hose pipes on a fine spray to cool us runners down.

The country lanes had some shade and some hills with one big hill at the half way point.

I found the country lanes very pleasant and enjoyable to run along and the peacefulness helped with the ever increasing heat and sun glare.

The signage and directions were spot on with no opportunity to get lost. The main roads and motorway were closed and safe to run on. I noted quite a few police and ambulance vehicles on route which felt reassuring given the heat.

The marshals were first class and I have never seen so many high viz vests. They were scattered all the way around the route and were so friendly and encouraging.

Back onto the bridge for the final three miles but not before stopping to admire a steel drum band.

By this time I was flagging. The heat was so intense and energy sapping.  I had eaten my gels and was aware there were no more water stations left. I got into a slow jog up the ascent onto the flat part of the bridge. I kept telling myself only three then two miles to go.  At this point when I felt at my hardest struggle I met a Stroud AC runner and we decided to run the last bit together just to keep each other going. Having some company was just what I needed and before I knew it the road was gone and I was running towards the finish line and my medal.

Would I run this race again? Most definitely a big YES. Probably my best medal this year. Good quality tshirt and goody bag with a bottle of water and a banana.  A very well organised, friendly, and good value for money event.  Race number and clear instructions sent through the post. Plenty of parking close to a colourful race headquarters.  Good facilities for spectators especially those with old Chocolate Labradors who bark at all the high viz (my Charlie boy and biggest fan). Very friendly and helpful race marshals and officials.

Were there any negatives? Maybe just another water station especially given the forecast and plastic bottled water is a big no no nowadays.

Best part of the day? A proud cuddle from my daughter, kudos on Strava, pigging out on my goody bag in the car on the way home and a well earned G & T in the evening.

Thank you Mel for a great race report!