Posted on December 5, 2018 By Anne-Marie Delrosa

Angie Ayling tells us about this race:

I signed up for this on Michelle’s recommendation; my only previous involvement with Endurance Life was the ‘Real Relay’ in 2012 – a fantastic experience. Meanwhile, Michelle has done a few of their events, including half marathons.

We both travelled to Dorset on the Friday and, though staying separately, met up for dinner where Michelle was staying only half a mile or so from the start. We went to register before eating, so spent the night with electronic tags on our wrists!

Our 10K race was not due to start until 11am or later, while the other events (half, marathon, ultra and ultra+) began from 7.30am onwards – at which time the rain was driving horizontally and visibility was almost nil. Over 1600 competitors were signed up in total, though not all turned up. The organisation of the whole event was absolutely amazing and one felt very confident that all the marshals and other volunteers knew exactly what they were doing. Mark Thomas was doing the registration on Friday evening and again on Saturday morning as well as recording finishers’ times later on – so he was on the go constantly and must have been absolutely exhausted.

The race began with a 500m climb out of West Lulworth, so we walked that part (as did those around us)! There followed a combination of running and walking until the halfway point – mostly into driving rain, such that we could barely open our eyes. Turning at the checkpoint, and having had some jelly babies, water and half bananas, we ran the remaining 3 miles back to the start. Throughout the race, having started near the back of the field, we were pleased to steadily overtake other runners and it was really nice to run together and chat as we went. It was pretty slippery underfoot and those without trail shoes struggled! There were great views of the sea, the coast line and Durdle Door when the rain abated and the only blot on the landscape was a rather huge caravan park on the edge of Lulworth. 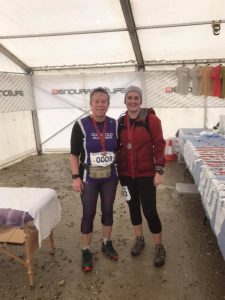 Because of the staggered start times, we finished at a similar time to those competing in the other events. This made it feel really inclusive and one felt part of one huge event, not five separate ones. It was a privilege to be amongst those who were the lead runners in the half, marathon and ultra races; I think the ultra+ runners were out for much longer.

I can highly recommend the event and have now signed up for the South Devon 10K on Feb 2nd; Michelle is doing the half – so it would be great if some more Allrunners signed up too! There is a very nice medal and a choice of colours of T-shirt.