Having always loved running and competed through to Nationals at school level, I decided that I wanted to join a local running club and start running competitively. Being a member of Stratford Park Gym, I would always walk past you lovely lot chatting outside on a Tuesday evening which was when I decide to join for a taster run…..and never looked back.

Consequently, after the birth of my son 8 and half months ago and being able to run whenever I wanted whilst I was on maternity leave (as long as Grandma was about to babysit), I thought that I was probably in good enough shape to enter Cheltenham half marathon. I have always been put off doing another half marathon when running one whilst I was at university and throwing up most of the way round (admittedly I was pretty hung-over).

Being highly competitive, I really wanted to run it in a good time, and I knew that I would know a lot of people ‘around town’ as I grew up in Cheltenham. However, I also play National League hockey and after two long months of pre-season, we had our first league game the day before. Luckily for me, one of my team mates is a fantastic Sports Therapist and she put me back together as best as she could after the game (I currently have really bad plantar fasciitis and a bulging disc so she really did have to put me back together).

Will Trippett and I lined up on the start line in the funnel that had the 1 hour 45 minute pacer. After about 5 minutes the adrenalin kicked in and as we were waiting for the Mayor to count us in, we hopped over the rope and joined the 1 hour 35 minute pacer. Off we went, following a balloon (the pacers) and I knew that Will would sprint off at a million miles an hour. My husband had reminded me of how I always went off way too quickly and to not do it when I had double my usual race distance to run. So, for once, I listened to him! It always takes a good couple of kilometres for my foot to stop feeling like a knife is stabbing into it anyway. 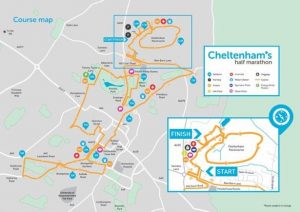 I cruised the first 6 km and Will had obviously remembered that he said he would run with me as he also slowed down to my pace….thank goodness! We wiggled through the town and I got shout outs from people that I knew which was fantastic and I spotted my husband and son cheering me on which always gives me a boost.

We went out towards Dean Close School and then headed back into town. Previous to the race I had already decided that as soon as I hit the 10km mark, I would start struggling (I had only completed one run at this distance previous to the race), and I certainly did. I am sure it is nowhere near like ‘hitting the wall’ in a marathon, but my back started seizing up and my legs felt like lead.

Will started edging ahead and the thought of running another 5 miles was really not pleasant. Fortunately a friend was outside the Prince of Wales stadium with a stash of wine gums and the sugar rush definitely helped. I managed to keep Will in view and as we were coming into the racecourse (the dreaded racecourse which everyone said was an awful loop) he slowed down and waited for me….thank goodness…..AGAIN!! I have had many a happy (and drunken) time in the racecourse and was quite excited to run around the course as in my previous career; I was a jockey and had always dreamt of riding around Cheltenham. However, this really did not help with the dreaded loop. My back was so sore, I could barely lift my legs and I was so grateful to get up the hill at the back of the course and see the downhill slope towards the finish line.

I crossed the finish line in 1.37.25 minutes which I was ecstatic about. I laughed at Tom (from the club) when a couple of months ago he said I should be aiming for under 1 hour 40 minutes. I loved it and would do it again and again. It was a fantastic half marathon, with great organisation and support, and I would highly recommend it!

If you want to sign up, here are the details of Cheltenham Half