John tells us why YOU should run Chester Marathon.

There are a few reasons why Chester Marathon is my favourite event. It might be fickle of me, but I just about qualify to be an elite runner for the race, which means that you get to use the jockey’s changing rooms at the race course. It’s warm, the showers are roasting, there’s free coffee, and the queues for the toilet are short (I generally need to go between 3 and 5 times before a race, so this is VERY important!). Probably the only down side is that the hat stands in the changing room are at about my head height, and you do risk clonking your head if you’re not careful. You can also way yourself, and work out how much you sweat out during a race (5lb, it turns out!) 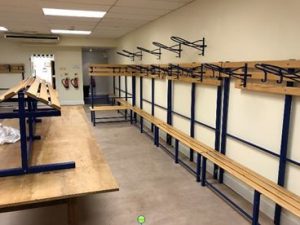 Other reasons (in no particular order) include:

The fixtures computer wasn’t as kind to me this year, having been given a home derby against Chester last year. Instead, it was leaving Stroud 9am Saturday morning with a teensy bit of a hangover and a trek up the M5 and M6 to Morecambe. Well worth it though, with Tranmere getting a last-minute winner to end up 4-3 victors. From there, back down to Wrexham where my mate had a spare bed in his Premier Inn room which he’d offered up to me. After 300 miles of driving, it was an early night and fingers crossed that I didn’t wake up too early.

Obviously there would be no such luck. I switched on my phone to check the time (05:10), and heard the dulcet Sheffield tones of my room-mate Giacomo (traditional Yorkshire name that), “Ay-up.” At least I wasn’t the only one woken early with pre-race adrenalin rushes.

Figuring that I might as well get myself a decent parking space, I set off for the racecourse in the dark, the amount of stars visible suggesting a cold start. The fourth person to arrive, and the first person (for the second year running) to pitch up at the elite runners area (did I mention I was an elite runner? I’ll try not to go on about it too much!), to be greeted by Kirsty and Andy the organisers. “Hello, weren’t you first here last year as well?” It’s nice to be remembered.

Eventually a few familiar faces turned up from previous years, and conversation was the usual. It is a nice race to come back to, the changing rooms are lovely, training hasn’t been the best, at least it’s not as hot as London was, bit of a niggle, we’ll just see how it goes today.

In my case, training hadn’t been the best. Life just got a bit in the way, and my five longest runs had been 20, 17, 17, 16 and 15 miles, which was far from ideal. And just being in a new place for training, where flat routes are unheard of and the average 5 mile run has more climbing than the whole of the Chester marathon meant that I didn’t really know where I was fitness-wise, as my training has been so very different in Stroud. I’d broken 2:45 at Chester last year, but that didn’t feel on the cards. A sub 3 hour would be the 6th year on the trot I’d managed that, which seemed a nice goal, but as it was, I knew erstwhile Allrunner Martin ‘Woody’ Wood was going for sub 2:50, and was being paced by Stroud AC’s Lee Rankin, so I decided to join them. With 10 minutes to go before the race, we were exposed to the elements, which came as a bit of a shock after the warmth of the changing rooms, and escorted to the elite runners start line, in a little roped off area ahead of the hoi polloi (definitely the last time!) A speech from the town cryer, assuring any Welsh runners that as the race was expected to finish before sunset, that they were safe to re-enter the walls of the city, and then we were off.

After about half a mile, Woody and Lee had caught up with me, and we settled into a nice rhythm of mile splits, although we soon found that chatting was causing us to speed up for some reason! Maybe it takes your mind off the pain. We had a nice group of half a dozen or so, including  couple of other Cotswold -based runners, and a young lad who was doing his first ever marathon. It transpired that he was running for Cancer Research, raising money in memory of his girlfriend’s dad. He was also a jockey, and was due to be running in the 3:00 at Uttoxeter that afternoon! The Racing Post had covered his story the day before, and online donations had rocketed from £2k to £9k following the story. 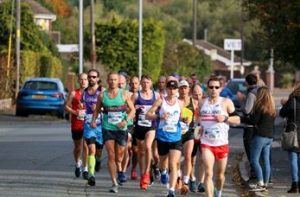 The cold and crisp start was giving way to a clear and sunny day and near perfect race conditions. I was feeling various bits of discomfort (sore feet and a tight calf, and glutes that were complaining after the 300 miles of driving, never mind the marathon), but the mile markers were being passed, and before we knew it we were going through 10 miles, and then the halfway point in around 1:24:30. Whilst this meant heading back towards Chester with the wind behind us now, it also meant that the uphill was still to come. But a couple of 6:12 minute miles at 14 and 15 showed the advantage of the tailwind.

There’s about 600 ft of ascent at Chester (and coincidentally, the same amount of descent), but the bulk of it is in the second half. Whilst this is nothing in Stroud terms (you could climb 600 ft in a mile from Bath Road to Rodborough Fort!), the fact that about 175 ft of this is over two climbs in the last couple of miles is not something you look forward to.

At mile 20, I politely mentioned to Lee that we seemed to be upping the pace a tad! It was then that he admitted that he was aiming for more like 2:47, but hadn’t wanted to say so at the start! I knew that Woody was well capable of that (I’d told him enough times on Messenger that he should be aiming higher than 2:50), and at this point I wished them luck, and said I’d probably just drop off the pace a bit. Maths keeps me occupied at the latter stages of the marathon, and I knew that 7 minute miles from here would get me in in under 2:50. 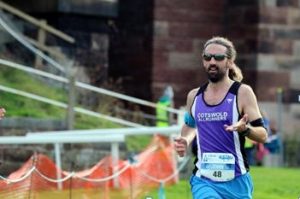 As it was, I looked down at my watch after the next couple of miles and saw that I was getting in a good 30 seconds below 7 minute mile pace, and all those stamina-busting hills in Stroud were paying dividends. Running alongside the 2nd placed woman, we made it up the hill to mile marker 25, leaving me 12 minutes to do the last 1.2 miles and break 2:50.

These last 1.2 miles involve dropping down on to the Dee, running along the block-paved riverside walk (which feels horrible after 25 miles of tarmac) and then on to the race course for a cross country-style finish. As I got on to the race course proper, I couldn’t resist but breaking into a little canter, miming a holding reins action, but the little bit of cramp I got as a result suggested I should just get on with running. I turned on to the final straight, managed a sprint finish and to overtake one person to finish 72nd overall, in 2:47:43. Photographs even suggest I might have been smiling. My first ever negative split marathon, with the second half ran slightly faster than the previous year, and my 5th fastest of my 12 marathons so far. I saw Woody, Lee and the jockey on the finish, and all of them had managed 2:46, although only one of us would be going over the jumps in 3 hours time.

So race over, a hobble back and a long hot shower after my weigh-in, a bit of buffet, and then the long drive back to Stroud, attempting to hold the steering wheel with one hand whilst massaging my calves and hamstrings with the other, and hoping my glutes wouldn’t seize up. I’d decided to skip marathons for 2019, and not to take my London place up, but I’m now signed up to do Chester again. It’s a great little race, and maybe I’ll see some Allrunners up there next year.