The week leading up to the Bristol Half Marathon had been unseasonally warm and sunny.  Of course, on the morning of the run a north wind was blowing rain in, and runners were huddling under whatever shelter they could find (including people’s doorways) before the race started.

I’ve never attended an organised warm up before, but as I was in the second of four waves I was already in my pen when a man appeared on a cherry picker above the runners.  Music started and we were taken through what can only be described as a 1980s Jane Fonda type workout.  I could have done this all day as it was good fun, but unfortunately that wasn’t an option.

Due to the weather, the organisers decided to reduce the amount of time between wave starts (from eight minutes) so that we weren’t all standing around in the cold rain for too long after the warm up.  So, literally about two minutes after the first wave departed, we were off.

The race starts in the centre of Bristol, goes up the Portway (the dual carriageway along side the river Avon), under the suspension bridge towards Shirehampton before turning 180º to go back down the Portway on the other side of the dual carriageway, then back into the centre for a wiggly windy tour of the cobbled streets around the centre and the docks.  Despite living in Bristol for most of my life, I didn’t realise the Portway was actually a massive long slope until we turned around and I was greeted with a downhill view.  That was probably my favourite section of the race, it meant I could actually relax a bit and appreciate the view of the Clifton suspension bridge.

There was diverse live music at frequent points along the routes.  It turns out Bangra, Steel bands,  jazz bands and samba bands are great to run to, Ed Sheeran covers less so.   However, no matter what type of music was playing, it was a welcome distraction from the dire weather!

The marshalls were all great, being more cheerful and encouraging than the weather dictated.  The water stations were manned by army/navy cadets and were well organised.  There were a lot of spectators.  I’ve never ran in a race where so many people were watching.  I was a bit disconcerted that I kept hearing my name being shouted.  At first I thought maybe I knew someone, but when I kept hearing my name and I was mainly surrounded by men I started to feel a bit jumpy.  At around five miles I finally twigged that everyone’s race number had their name in big letters.  I kept forgetting that though so spent most of the race in a surprised state. 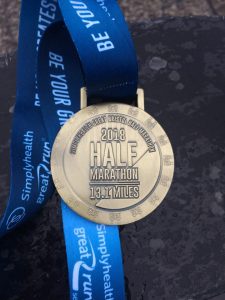 The last section of the race was frustrating. The cobbles were wet, and the route had lots of sharp turns which meant that instead of speeding up, slowing down was necessary unless you wanted to go skidding. The route kept getting tantalisingly close to the finish line, but then at the last minute would turn and head away again.  It was a relief to actually get to the end.  I had been meaning to do the Bristol Half Marathon for years, so I was pleased to actually complete it, and I ran all the way round without taking any walking breaks for water/gels like I usually do, which was a bonus. However, now I’ve scratched that itch, I don’t have any desire to do it again.  Personally, I prefer smaller, quieter, less corporate events.  But if you like big events, with lots of crowd support and a completely traffic free route then Bristol might be for you.

(Note from Anne-Marie: I’ve run Bristol twice and I really love it…it’s definitely one to try!)