Trailmania – the start of a legend?

On 22 July I completed – by the skin of my teeth – the third of three Trailmania 10k trail races, a new series created by Simon Barnes – iamoutdoors. As a memento I have three sparkly medals, that fit together like a jigsaw puzzle – very clever. I also have a few bruises (more about them later) and a great sense of achievement. 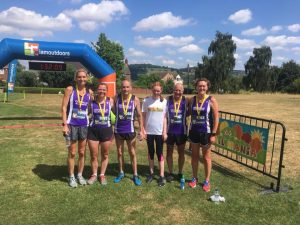 After about a year of not doing much running, I wanted to get fit and also wanted a challenge – well I certainly got that. Nailsworth Nelly was the gentlest, on 24 June. Starting above King George V playing fields, the route went through the woods up and then down towards and through Avening before turning back uphill (of course!) across open fields and then, finally, downhill through the woods back to the start. The Selsley Sizzler was the second event on 15 July. By now the 2018 heatwave was well and truly established: we all knew it was going to be tough. This time the HQ was Kings Stanley Village Hall. The run started gently across the fields, but soon took off for the very top of Selsley Common. The route then joined the Cotswold Way and went delightfully downhill through woods, and along the base of the escarpment towards – but not actually reaching – Coaley Peak. In classic Simon style we turned uphill via some very steep steps before levelling out and then going steeply downhill back into Kings Stanley.

Then to top it all there was the Cranham Beast, which deserves its name. The weather was still very hot, and everyone was glad that the run started in Buckholt Woods. Down we went, and out into open country at the bottom, then between the reservoirs before the beastly bit – running up the side of Cooper’s Hill, close to the cheese rolling route. The view from the top was brilliant, but after a glance off I went downhill again. At the timber yard I made a mistake, keeping left when I should have turned right. I ran about 1 km round the base of Cooper’s Hill, increasingly sure that I was wrong – and when the view over the vale emerged again it was clear what I had done. I went back, found the route marker ribbons by the timber yard and set off very slowly down the right track. Tired and cross I fell over – hence the bruises. But it was mostly my pride that was damaged.

So I did over 12 km when everyone else did 10! I was, of course, last person home. But to my relief Simon, Dawn and Marcia were still there, I got my medal and a celebratory hot dog and live to tell the tale. Despite my personal epic in the Cranham Beast, it was a great series of runs. I hope that the series will be repeated next year, perhaps with a few more route markers for the less observant runner!