103 miles. over 10 stages, in 29 degree heat….Find out how four of our runners got on in their race reports and photos attached from some of the other legs. 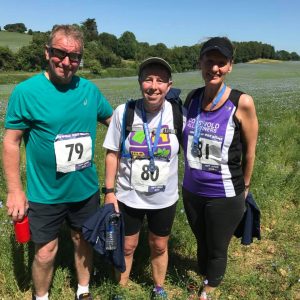 I ran this leg along with David R and Sue L. The sun came out 30-40 minutes before we began at 9.35am, but that still meant it was not too hot as we waved Danny goodbye and set off up to the trig point on the top of Cleeve Hill (the highest point on the Cotswold Way).

The next 5 miles were steady going – a few ups and downs, but also a very long downhill section through woods which kept us out of the sun for some time. At the bottom, once we had crossed the main road, there was a reception committee cheering and dancing, providing water, jelly babies and a shower (from a watering can).

However, what goes down must come up, so there inevitably followed a very steep uphill section which seemed to go on forever. I walked this and was quite pleased to hear that the others (way ahead of me) did too. Once at the top, I realised that I was in with a chance of making the (original) cut-off time, which I rarely manage, so I ploughed on, albeit slowly. A welcome cheer from some American walkers helped to spur me forwards and, at last, I reached the last field which was a swathe of blue (linseed), so it was like running by the sea!

David and Sue finished some time before me – a great run by both of them. We were met by Michelle – so many thanks to her, Danny and, of course, Marcia, for making this possible for the club.

The Cotswold Relay is such a great event and we look forward to running as part of a team with fantastic friends each year. 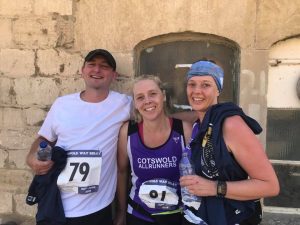 We thoroughly enjoyed our recce again this year, in the rain, but, like everyone else had been praying for some serious rain and a drop in temperature for race day.

Despite the gruelling temperature and tough going we made it round. Emma, Simon and myself completed Leg 5 and when the fuel tank ran dry a mile from home Simon was brilliant and stuck with me.

Quitting was never ever an option. It never is but next time let’s pray for some cooler weather for us all. 100% completing. That’s a fantastic success in the conditions for such a great club.

Amazing team support all the way. Huge thank you from all of us. 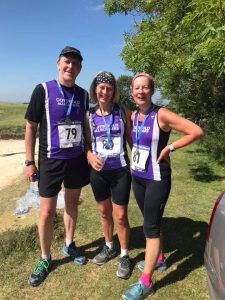 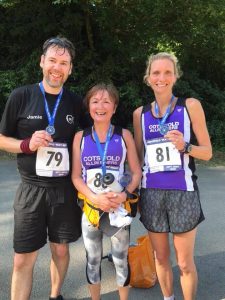 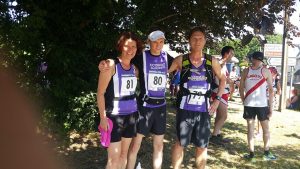 Knowing that the start of Leg 6 is an Allrunners favourite on a Thursday and the end, often part of the Sunday run from Coaley, I was under no illusion that this was going to be difficult……particularly with the heat. 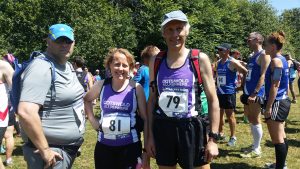 Gavin, Richard and I were in good spirits at the start or maybe we were already suffering the effects of the sun.  Having Nikki and Marica giving words of encouragement made us feel positive, along with the added attraction that if we finished we’d get a t-shirt and medal.  Note: Julia Ruggles, I love the medals!

Having donned the sun cream, jungle spray, and armed with emergency blanket(?!), phone, gloop, tissues and water I was ready for the off.

The first ascent through the field of cows was fine, I was feeling good.  When we started to climb on to Selsley the little voice inside my head was thanking the runners in front of me for walking it. Though we did a good brisk walk up the hill and onto the common.  Like everyone else running on Saturday, the shade of the woods was welcome and I was able to up my pace a little.  The woods were full of walkers going the other way, so there was a lot of polite stopping and moving over from both parties.

Going onto the open by the viewpoint was great; there was the water checkpoint and sponges. I decided to avoid them, something to do with salt going into eyes.  Then it was back into the shade and we made our way along the undulating route before finally going downhill towards the farm and the bottom of Cam Long Down.

As I was going downhill I was chatting to a runner who told me she’d recently run the Glencoe marathon – fair play to her, I was in awe! And surely this little peak would be nothing compared to that!

Not sure if I can print the next bit, but the runner behind me who hadn’t recce’d the route, looked at the hill and said ‘sh***ing hell’ – I think her sentiment was right.  Her running partner informed us that there was about 50 minutes to the (original) cut off (yeah, thanks for that!) Again, it was a good walk up the hill and onto the top, where sweating buckets I succumbed to the painful sweat in eyes situation. I couldn’t see a darn thing and my tissues weren’t suitable for removing the salt.  So I continued running across the top blinking, stumbling and moaning to myself.

Once I got my vision back, the last couple of miles were a delight, in so far as they were mainly downhill and across fields.  I knew the end was in sight, a last little incline up Long Street, then along Parsonage Street and finally I saw the Old Spot, along with my better half (Steve) and Richard (who’d finished a good 20 minutes in front of me).

After I crossed the line, I finally looked at my watch; yes I was in the time – yippee!  And thank you to Michelle for being there at the finish!! 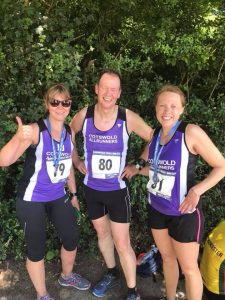 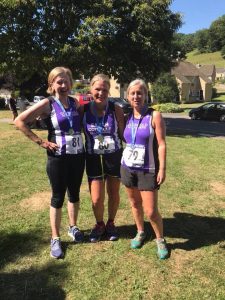 I started with Danny and Bea feeling well prepared but nervous, under a deep blue cloudless sky.  Marcia had been there at the start which was really nice, as she wasn’t running so was a calming influence!  I’d already recced the route, and had a plan: quick walk up the hills as they were the ‘tough’ parts, and go at a good pace along the nice open flat bits/downhill.  I decided to take my running belt with a small water bottle rather than a more cumbersome backpack with a bladder as I don’t drink much on runs anyway, and figured I could top up at water stations if needed.  This proved to be a huge mistake!

We set off at a slow pace, through narrow paths and then up the first hill, which was mainly huge steps through a wood.  Some runners found this first climb difficult (clearly they weren’t from Stroud) and were going a lot slower than I would if I was out for a leisurely walk. So, when there was space I started to pass some people until I ended up with others who were going at my kind of pace. Before long we were out of the woods, at the top of the hill and it was time to start running on those nice, easy flat bits!  Or so I thought.

At about mile 3 I had to abandon my plan. Those open flat bits that had been so easy on the recce were now the toughest bits, and the wooded hills were a pleasant respite from the sun.  I was desperate to get the open bits over with so that I could get into the shade as quickly as possible, however, the blazing sun was making me feeling sick and dizzy and my legs were like blocks of wood. Having had sunstroke and heat exhaustion as a kid I was keen to avoid doing so again.  So I decided to abandon my plan and run to feel.  I had been aiming for 2 hours, however with the weather I ditched any time aims and just went for getting to the end in one piece.  I ended up run/walking the open sections.  The group that I had fallen into step with were all doing likewise and the general chat was that we had to be be careful, everyone was mutually encouraging and checked in that others were ok if they were looking like they might not be.

There were water stations, at a couple I could refill my small bottle but at others we were only provided with a very small amount of water, and I didn’t want to ask for more in case there wasn’t enough for the back runners.  By 8 miles I was extremely thirsty and water was the only thing on my mind!  I have never experienced a thirst quite like it, and it made it even more difficult to keep going.  There was a constant stream of people doing the Cotswold Challenge, who were walking in the opposite direction to us throughout our leg.  The inconvenience of having to dance around them on narrow paths was made up for by the constant stream of encouragement, that was of course, reciprocated by the runners. I couldn’t help but eye up the walkers’ copious water supplies enviously though.  The only thing motivating me to hurry on towards the finish was the thought that there was a bottle of water waiting for me at the end of it!  I think if I’d taken my hydration backpack I might have got a better time, as I was definitely significantly dehydrated.

The last mile or so was refreshingly easy as it was mainly downhill.  After feeling like the run would never end I couldn’t quite believe that the crowd of people ahead were at the finish line. I reasoned that this was a pre-finish line crowd and that the real end was somewhere else.  Then I was absolutely delighted to spot Michelle!  As well as just generally being a lovely person, her presence indicated that yes, it really was the finish!  I stopped my watch a bit late, but it said just over 2.05 so 15 minutes before the altered cut off, which I was happy with given the circumstances.  And that bottle of water was the best water I’ve ever had!  The “I’m going to die” feeling disappeared after I’d drunk a litre, and was replaced with elation that I’d made the cut off time despite the heat.

Sadly, one of the quicker runners from another club had succumbed to the heat near the finish, and was being attended to by medical people, before he was taken off by an ambulance.  It served as a reminder that it can be dangerous to push yourself in the heat.  I was relieved to hear that all the Cotswold Allrunners made it back in one piece.

So what did I take away from this run?  Firstly, that running in places with little shelter in the heat is extremely difficult.  Secondly, next time I do the Cotswold Way I’m going to take my backpack if it’s hot.  Thirdly, runners are lovely bunch, and our club is awesome. And finally, that it is definitely much more important to finish in one piece than it is to get a good time. 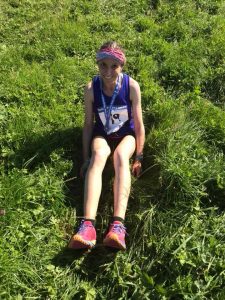 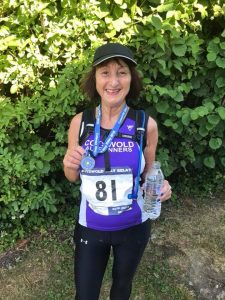 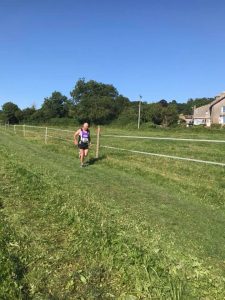 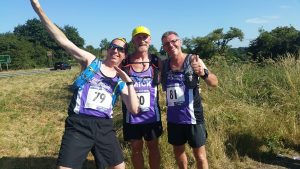